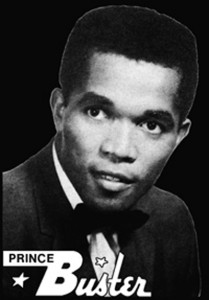 You may not have heard Prince Buster’s original “Judge Dread” records–but if you’re a ska fan, don’t be surprised if they have a familiar ring. “Stupid Marriage,” a classic track from the first Specials album, is a direct tribute to these mysterious and slyly humorous relics of the rock steady era.

The saga began in 1967, with the release of the original “Judge Dread” (ominously subtitled “Judge 400 Years”). The eponymous character was a fierce, authoritarian Ethiopian magistrate who routinely sentenced “rude boys” (Kingston street toughs) to outlandish prison sentences in order to “save the Black nation.” Next to this guy, the Specials’ Judge Roughneck–who passed a sentence of only five months in “Stupid Marriage”–was a pussycat, and the record actually provoked something of an uproar among the rudies. The Prince teased his critics with the follow-up single, “The Appeal,” which holds out the possibility of mercy–only to have the judge sentence a barrister to life imprisonment and increase the rude boys’ sentence to six thousand years. More protests followed, with other artists rushing to the defense of the judge’s victims. Prince Buster, apparently tiring of the whole thing, rush-released “Judge Dread Dance,” in which our man has a change of heart and pardons everyone. Celebratory dancing ensues.

END_OF_DOCUMENT_TOKEN_TO_BE_REPLACED 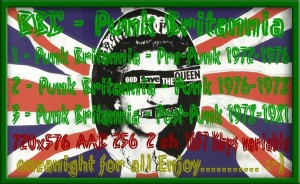 Oh, the irony. Originally broadcast in June on the BBC, this three-part series marks the 35th anniversary of punk’s reign of terror in the summer of ’77–and along with the monumentally odd “Pretty Vacant” production number at the Olympics, demonstrates the final transformation of punk into an enshrined part of the British Cultural Heritage.

It was bound to happen, but that’s no reason not to savor this well-assembled official history, which ranges from the proto-punk glam and pub rock era of the mid-’70s to the eclectic post-punk movements of the early ’80s. The vintage clips are plenty tasty, and the recent interviews give you a chance to marvel at the timeless style of Siouxsie Sioux, the shocking decrepitude of Mark E. Smith, and the reinvention of John Lydon as a chortling elder statesman and professional English eccentric.

END_OF_DOCUMENT_TOKEN_TO_BE_REPLACED

Peter Whitehead’s 1967 documentary Tonite Let’s All Make Love in London is of such historical interest that it cries out for a full restoration by the British Film Institute. Famous for its panoply of ’60s scene makers and its footage of a very young Pink Floyd performing “Interstellar Overdrive,” the film has languished in distribution limbo for decades, viewable only in bootleg prints of varying quality.

END_OF_DOCUMENT_TOKEN_TO_BE_REPLACED

The much-acclaimed new album by Jimmy Cliff features a rendition of “The Guns of Brixton” by The Clash–a song which was influenced by Cliff, and includes references to his role in The Harder They Come. Somehow, this feels like the inevitable closing of the circle.

As a kid in the mid-’70s, one of the funniest things I ever heard was a promotional record my uncle acquired from a friend who used to work for the Oscar Mayer Company. Recorded around 1966, the album consisted of six versions of the familiar “I Wish I Were An Oscar Mayer Wiener” jingle, performed in various pop styles of the day. I seem to recall a breathy bossa nova, a Tijuana Brass-type arrangement, and a country version replete with steel guitar and echoing backup vocals–and that the merging of the deadpan performances and ridiculous lyrics provoked fits of paralyzing laughter in my ten-year old self.

END_OF_DOCUMENT_TOKEN_TO_BE_REPLACED

Like Raw Energy, the subject of my first “Punk Britannia” post, Wolfgang Büld’s two documentaries on early British punk put you right into the scene as it was happening–before the codification, commercialization, and disillusion set in. Although Büld had a shaky sense of which bands really mattered (The Sex Pistols and The Damned are nowhere to be seen, while  also-rans like Chelsea get significant screen time), both of his films offer a “you are there” immediacy that more than compensates for their iffy production values.

END_OF_DOCUMENT_TOKEN_TO_BE_REPLACED

The band name-checks quite a few classic albums in this recent ditty, which is about an estranged couple dividing up their records. If you don’t recognize and love at least a few of the elpees mentioned herein, you haven’t been paying close enough attention.

This made me sit up and take notice when I heard it on BBC6. I’m not familiar with Richard Hawley, but apparently his latest album, “Standing at the Sky’s Edge” (from which this single was taken), is a big departure from the tender balladeering for which he’s best known. This is droning but hard-charging raga space rock (or something like that) and it’s really very, very good.

I used to think the original British punks were terribly served by the movies. In the 1980s, it seemed like only three films depicting the scene were ever shown, and each was more depressing than the next. First, there was Don Letts’ The Punk Rock Movie (1978), a super-8 compilation of live performances at the Roxy that suffered from atrocious sound, complete lack of context, and some exploitative shock-horror audience footage. Then there was D.O.A.–A Rite of Passage (1980), which depicted the Sex Pistols’ disastrous final tour through the southern United States; it’s an absorbing if ugly document, a kind of punk Gimme Shelter that captures the last desperate moments when everything fell apart. Finally, there was Sid and Nancy (1986), a well-acted but willfully lurid biopic about British punk’s least inspiring figure. (John Lydon: “To me this movie is the lowest form of life.”)

END_OF_DOCUMENT_TOKEN_TO_BE_REPLACED

Deaf School were Liverpool’s main claim to fame in the peculiar era between the end of Merseybeat and the post-punk renaissance led by The Teardrop Explodes and Echo and the Bunnymen. Not as serious as Roxy Music and not quite as smartass as Sparks, but exploring similarly theatrical art/glam/camp territory, they deserve a lot more credit than they ever received at the time.

In the movie Bob Roberts (1992), writer/director/star Tim Robbins had some fun with the notion of a Republican senate candidate who doubles as a right-wing folk singer, and regales his followers with protest anthems like “Drugs Stink” and “Times Are Changin’ Back.” That the concept seems intrinsically absurd points to the perennial dearth of musical inspiration on the right. Few conservatives would bother to deny that, ideology aside, the lefties have all the best tunes.

And yet, amid all the progressive sentiment that dominated the pop charts in the 1960s, a few lonely voices cried out against the prevailing trends and released singles denouncing the perceived permissiveness and anti-Americanism of the young. Some of them were substantial hits.

What follows are five of the most notable counter-counterculture records of the ’60s, in ascending order of tackiness.

END_OF_DOCUMENT_TOKEN_TO_BE_REPLACED

Here’s a young Ian Dury in his first BBC appearance, fronting the pub-rock combo Kilburn & the High Roads. The guitarist is Nick Cash, later the singer for 999.

I don’t think I would have been happy as a rock musician. Even if I managed to overcome my stage fright and loathing of the spotlight, I believe the appalling sights, sounds, and smells of life on the road would have shriveled my resolve in short order. But I would have loved to be John Peel.

Not that I ever actually heard his show. This revered BBC radio host, who shaped the taste of two generations and launched innumerable music careers, was very much a British phenomenon–barely known in the U.S. and completely inaccessible to a kid growing up in the pre-digital Pacific Northwest of the ’70s and ’80s. But if you were as steeped in the British music of the era as I was, the legend of John Peel loomed large.
END_OF_DOCUMENT_TOKEN_TO_BE_REPLACED

Big thanks to Erik Phillips for this link to the wonderful Toy Dolls video anthology, We’re Mad – Idle Gossip. Veterans of the second wave of British punk, The Toy Dolls were essentially a flag of convenience for singer-songwriter-guitarist Olga, a scrawny bloke with a cartoonish voice and lickety-split guitar chops. The terrace-rattling group choruses link them with other second-wave bands like The Angelic Upstarts, but instead of political anthems and social realism, the Dolls offered zany takes on working-class provincial life with titles like “You Won’t Be Merry On A North Sea Ferry” and “Yul Brynner Was A Skinhead.” Give them a look and a listen; they will increase your will to live.

“The lyrics describe a conversation between ‘Hattie’ and ‘Matty’ concerning the American Bison and the desirability of developing dancing skills, although no attempt is made to synthesize these divergent topics.” — Wikipedia

“John, You Went Too Far This Time” is a 1969 one-off single by Rainbo (a then-unknown Sissy Spacek), chiding John Lennon for appearing buck nekkid with Yoko on the cover of the Two Virgins LP.

Alfred Hitchcock died 32 years ago today. In this clip, James Brown actually confuses Psycho with a William Castle ripoff of Psycho called Homicidal, but Hitch doesn’t correct him and handles the question with his usual aplomb.  A class act.

Robbie’s pop combo from My Three Sons, performing “Good Man to Have Around the House.” The harmonies need a little work.

The Pretty Things’ S.F. Sorrow was arguably the first rock opera, but don’t hold that against it. The story of the miserable childhood, traumatic adulthood, and unbelievably lonely and depressing old age of one Sebastian F. Sorrow contains some of the band’s most indelible music, and lacks the oppressive bloat of most concept albums. And then there’s this: a French TV appearance which finds the Pretties singing of Pvt. Sorrow’s wartime experiences while an INCREDIBLY ANNOYING MIME-LIKE CREATURE cavorts in the foreground. These things happen when R&B bad boys discover Art.

Mensi, the lead singer for The Angelic Upstarts, with a poetic warning to any would-be scabs. If I had an accent like this, the world could kiss my ass.

Oh, where hae ye been?

At least that’s what Sylvia Wright thought she heard when her mother read to her from Thomas Percy’s ballad collection, Reliques. The last line is actually “and laid him on the green,” but her mistake proved fortuitous, as it led Wright to coin the marvelous and useful word “mondegreen,” which means a misheard phrase—most commonly in the lyrics of a song.

END_OF_DOCUMENT_TOKEN_TO_BE_REPLACED

I don’t know which is more astonishing: the fact that Wire were booked onto The Late Show Starring Joan Rivers in 1987, or that they ended up sharing the stage and making awkward banter with guest host Suzanne Somers. The band performs “Drill” from the Snakedrill EP (lousy sound quality, but still) before answering Ms. Somers’ deep and probing questions.