About the film:
SpokAnarchy! is a feature-length documentary that chronicles the manic highs and desperate lows in the emergence of the punk rock scene in the culturally barren Spokane, Washington of the 1980s.

This coming-of-age story becomes a coming-of-middle-age story as the scene’s survivors take an unflinching look at their past, and how their lives were shaped by those years of music and mayhem. Aggressive and experimental music, art, and rebellion was the glue that brought them together, and it still resonates 30 years on.

For some the results were devastating. Some went on to bigger and better things. But all carry with them the independent and creative DIY spirit that made SpokAnarchy! live up to its name. More Info. 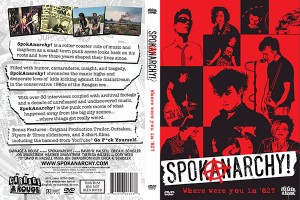